NEWS RELEASE: We want sexual health to go viral... in the social media sense of the word!

Embracing social media in the new age of non-profit sustainability

CALGARY – Sexual health is going viral – in the social media sense of the word. The Calgary Sexual Health Centre (CSHC) is launching its “#ChangeMaker” campaign which will aim to create a buzz with social media audiences in an effort to raise much needed funds. Known for innovative approaches in its work and its 40 year history of pushing for change around sexual health issues, CSHC will be looking to a few bold supporters to stand up as ChangeMakers – and to help spread the love. 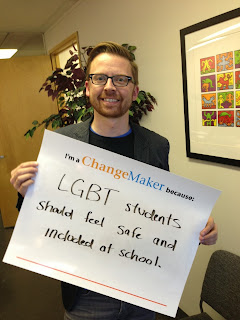 “We’ve been having a lot of fun with our social media presence, and we’ve found it’s been a great tool to support our mission to normalize sexual health,” said Pam Krause, Executive Director of CSHC. “We get to interact with our followers on everything from sex ed basics to broader societal issues that drive our work, like consent and sexual rights. It gives us the ability to connect with our supporters in a whole new way and to reconnect with the underlying societal issues that have sparked our passion for over 40 years. ”

With their #ChangeMaker campaign, CSHC aims to engage supporters in reconnecting with their own personal reasons for why they choose to support CSHC’s work, and to share it online. But the organization cautions that standing up as a ChangeMaker requires bold commitment.

“Our supporters have always been an audacious bunch. Together we have stood proud on so many hard-fought issues; reproductive rights, LGBT equality, non-judgmental sexual education in our schools. This campaign aims to bring public focus back to these important issues, and to rally our audacious supporters to join us in making important change.”

In keeping with their history of incorporating new approaches, the organization’s #ChangeMaker campaign will include a social media component which aims to inspire Calgarians to be a ChangeMaker – or to help find a ChangeMaker. 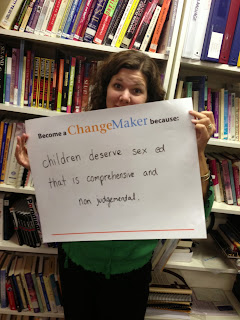 “Share your personal reason for creating change. Maybe you’re one of the 100 people who can donate to be a ChangeMaker, or maybe you’re a youth or parent or concerned citizen who encourages a ChangeMaker to step forward,” said Krause.
“Visit our website, print a ChangeMaker sign to write down your personal reason, then share a self pic or video with us on Twitter or our Facebook page. Together, we are using social media to bring a face to some big social issues and make some big social changes.”

The organization is also using the campaign as an opportunity to explore using Vine, a new app that lets the user record and share short looping videos. Globally, the nonprofit world has been typically slow to embrace social media in their work, including Vine. The CSHC hopes the video app will offer a creative and compelling addition to their social media toolkit.

For more information about CSHC’s #ChangeMaker campaign, visit www.change-maker.ca or tweet the organization at @YYCSexualHealth.

At the CSHC, we don't believe that education is just about learning the facts. We believe that it is about making meaning of information through discussion. Thanks for joining the discussion!

Find us online at: www.calgarysexualhealth.ca.

Calgary Sexual Health Centre
Calgary, Alberta, Canada
The Calgary Sexual Health Centre is a community-based organization that provides access to non-judgmental sexual and reproductive health services and supports across the lifespan. We began as a grassroots volunteer organization and have been providing comprehensive sexuality education and counselling to the Calgary community since 1972. Our vision is, creating a society where sexuality, in all its dimensions, is considered a normal and healthy expression of life and everyone has the right and the ability to make informed choices to achieve sexual well-being.