There are three key areas that CSHC is focused on: Healthy Bodies, Healthy Relationships and Healthy Communities. These focus areas speak to the core of our work; they support our vision for the community and the mission we are on to achieve it.

When you ask Lemlem Haile what her first experience was when she became involved in FAIR – Families Achieving Inclusive Relationships, the word you’ll hear first is “surprise.”

“I thought maybe it would be a hard conversation to have, that people wouldn’t want to come to our first meeting. I was surprised by the response; people really wanted to understand and talk about sexual health, especially with their kids.” 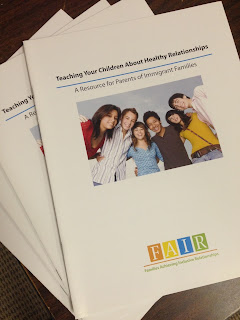 She’s talking about her initial reaction to Calgary Sexual Health Centre’s community development project that reaches out to immigrant parents. As a Community Social Worker with The City of Calgary, she often works with immigrant communities and was invited to the first meeting as a community partner.

“The first dialogue we had was about how do we talk about this as a community? What are your strategies to talk to your kids?” says Haile. “And they had questions, like ‘how young is too young to talk to your kids?’ And we said if they’re old enough to understand, talk to them. And that was where parents were like, yeah, I’m going to go talk to my three-year-old son – it was an ‘aha’ moment for a lot of parents.”

The project offers support and information to help parents talk to their children about their family values and how they connect to healthy relationships and healthy bodies. She says parents were especially engaged once they started talking about the safety of their children.

“We talked about how the more parents make it safe for them to talk, the more these kids will come home and talk to their parents instead of going on the internet for answers.”

Haile says perhaps one of the most important aspects of FAIR is the way facilitators bring the parents in as partners and ask for their feedback.

“The parents were really engaged,” she says. “They were reviewing the information and they had a say and they gave us really good ideas. They were the ones who suggested that instead of a Sexual Health Guide, let’s call it a Parent Guide, and it really is – it’s about relationships and values.”

Most of all, Haile believes that it’s the respect for different cultures that makes FAIR successful. She says the program helps people bridge the conversations they’re already having in a religious or cultural context with accurate sexual health information.

“There’s a fear and perception that someone else might push their values on a community,” she says. “But everyone talks about sexual health, every religion talks about it – it’s just a different way of presenting the information.”
Posted by Calgary Sexual Health Centre at 8:19 AM

At the CSHC, we don't believe that education is just about learning the facts. We believe that it is about making meaning of information through discussion. Thanks for joining the discussion!

Find us online at: www.calgarysexualhealth.ca.

Calgary Sexual Health Centre
Calgary, Alberta, Canada
The Calgary Sexual Health Centre is a community-based organization that provides access to non-judgmental sexual and reproductive health services and supports across the lifespan. We began as a grassroots volunteer organization and have been providing comprehensive sexuality education and counselling to the Calgary community since 1972. Our vision is, creating a society where sexuality, in all its dimensions, is considered a normal and healthy expression of life and everyone has the right and the ability to make informed choices to achieve sexual well-being.